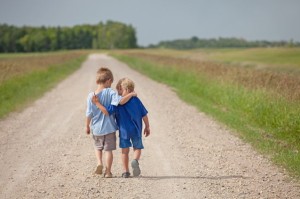 Compassion is a beautiful thing…both to observe and to be a part of. I was teaching in an elementary school last week and saw compassion in action. A little girl was sobbing as she came up to me on the playground. When I asked her what was wrong, she said, “Juan said that I was responsible for everything that was wrong in the world!” I wanted to laugh at the absurdity of the statement, but to her, it was a cut to the bone.

As I put my hand on her shoulder I said, “Don’t pay attention to Juan.  He does not know what he is talking about.” Three of the little girl’s friends immediately surrounded her. They were consoling her, hugging her, and stroking her hair. They felt her pain.

I asked one of the girls to go get Juan and bring him over to us. A minute later I could see Juan walking towards me with that “Uh-oh I am BUSTED look” on his face. I could see the defiance in him when he walked up to us. I asked him if he told her that she was responsible for all the problems in the world, and he immediately started the blame game. “She did this and she did that.” I think every adult that has been around this scenario can appreciate the predicament.  I said, “Stop! I don’t want to hear it. Was what you said to her kind?” He started to argue again…and I said, “No, was it KIND?” He finally hung his head and said, “No.” Then I said, “Well, what do you have to say to her?” He looked at her and said, “I’m sorry.”  I looked at her and asked her, “What do you say to him?” She said, “I forgive you.”

I looked at both of them and asked, “Are we OK then?” He smiled back at me. She smiled back at me, and all was well with the world again. They both ran off playing and laughing. What struck me about this episode is that it is very common. It is played out a thousand times every day on playgrounds all over the world. But what really touched me was the compassion she received from her friends. They felt her pain (whether it was real or not). They wanted her to know it would be OK. They were there for her.

But what if a child does not have anyone in their corner? What if nobody cares that they are hurting emotionally or physically? That happens every day too, unfortunately. That is where we as adults have a responsibility to be kind, be compassionate, and be the one who cares. Everyone needs to know that somebody cares. Next time you see someone hurting, be compassionate. Show them the love that we all need. There may not be anyone else to help them through their crisis.

Never underestimate the power of compassion. It is like being God with skin on to them because that is who God is; He is love. When you are compassionate to someone, you are showing them the love of God.

This entry was posted on Monday, January 18th, 2016 at 2:25 pm and is filed under Motivational, Relationships. You can follow any responses to this entry through the RSS 2.0 feed. You can leave a response, or trackback from your own site.

This site uses Akismet to reduce spam. Learn how your comment data is processed.